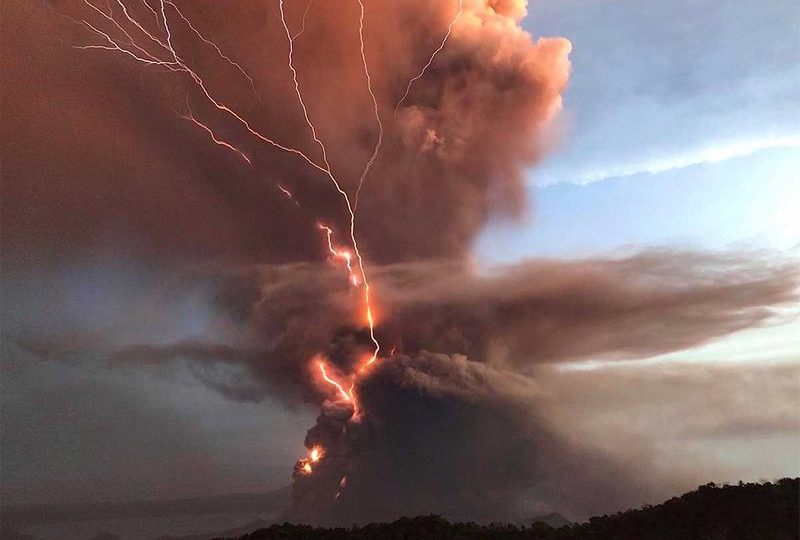 What causes the lightning? Why does it rain mud when a volcano erupts? Find out!

Volcanoes and lightning storms are awe-inspiring, fear-inducing feats of nature. Put them together and you have a truly terrifying event. Volcanic lightning is a mysterious phenomenon that generally occurs at the early stages of a volcanic eruption. But why does lightning occur whenever a volcano erupts? Before we answer this question, let’s first see a well-known example: The Taal volcano eruption in January 12, 2020.

This volcano is a complex1also called a compound volcano, is mixed landform consisting of related volcanic centers and their associated lava flows and pyroclastic rock. volcano located on the island of Luzon in the Philippines.

It is the second most active volcano in the Philippines with 34 historical eruptions. Viewed from the Tagaytay Ridge in Cavite, this volcano presents one of the most picturesque and attractive views in the Philippines.

Since 1572, there have been 33 recorded eruptions at Taal. The first eruption of the Taal volcano occurred in 1572.

The latest eruption ever recorded, hence, the 34th, was today’s–January 12, 2020. (At least the date when this blog post got published).

The cause of lightning

There are actually two reasons. One, research suggests that the reason is the rubbing together of individual ash particles. Then these rubbing-together builds up enough static electricity to generate a lightning bolt.

Try this! Get a ball pen (metal or plastic) and a small piece of paper. Then tear the paper into smaller pieces. Next, rub the pen against your hair. (If you’re bald, try it on your clothes). Lastly, put the pen near these tiny papers:

This is static electricity at work!

Why does it rain mud during an eruption?

We know that there are ashes going out of the volcano. We also know that ashes are dry right? Did it just become wet, and thus, producing mud? The answer lies on a rather surprising discovery: ice.

Scientists think that as the plume of ash and water vapor rises from the volcano, ice begins to form in its highest layers. From there, lightning forms the same way it does in a thundercloud: ice crystals colliding build up enough of an electric charge to trigger a lightning strike.

Additionally, ice melts to water. Having that in mind, we can conclude that the ashes gets wet by the melted ice or water; hence, the raining mud.

Thank you for taking your time reading this article! Please make sure that you follow the government safety reminders as indicated below:

And please don’t forget to check out these other articles:

One thought on “How Does the Taal Volcano Eruption Produce Lightning?”